Cape York: One of the most pristine wilderness fishing destinations in Australia

The rivers of Cape York, where we run our Cape York Barra Fishing Safaris, are the Normanby, Bizant, Hann, Morehead, and the North and South Kennedy Rivers.

These rivers weave their way right through the Cape York National Park until they empty into the magnificent Princess Charlotte Bay. With these deep rivers reaching so far inland, and also being part of a National Park they are protected from netting by professional fisherman.

The rangers presence all year round also gives you peace of mind that no illegal fishing can be carried out, thus protecting this valuable resource and ensuring extremely good fish stocks now and for future generations of keen anglers that come to Cape York for Barramundi Fishing. 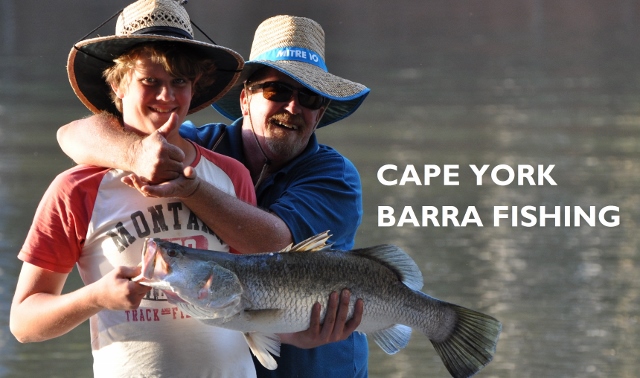 There’s nothing better
What a beauty
Barramundi at its finest
Jon just popped out to grab something for dinner… 20 minutes later 💥
What an absolute beauty!
Nice little lizard...🐊
Nice one Arron
Night…
Glorious morning
Doesn’t get much better than this…
There’s one good thing about fish like this, you can catch them again, but only if you let them go…🎣
Back she goes…
Another day…another Barra…where would you rather be?
Can’t fit this lady in the one pic - scroll ➡️
Perfect weather for it! #capeyorkbarrafishing
How about this one?
Cracking barramundi in Cape York
Winners are grinners- puts a smile on everyone’s dial!
Barramundi fishing all day and into the night - where would you rather be?